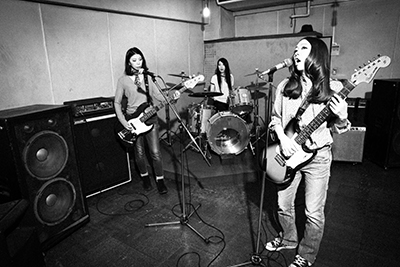 In 1991, four young girls gathered to start the band Noodles, performing their first shows in Yokohama. In 1995, they released their debut album “JYURYOKU DOROBO” on the Benten Label. That same year, the girls wrote and recorded a song for a Coca-Cola commercial. The song became a big hit and was a radio favorite throughout Japan. In 1999, the band moved to Delicious, the new label run by rocker Yamanaka Sawao of The Pillows. Noodles began to focus their efforts on recording and playing shows. Since then, the girls toured Japan eight times, building a legion of loyal fans. In March, 2003, they opened for their heroes, The Breeders, in Osaka. Later that year, Noodles started to branch out overseas by performing at the CMJ Music Marathon. They have since been back to the States for four times US tours and have appeared at SXSW two years in a row. Their most recent US tour, in spring 2005, was as the opening act on the very successful Delicious Bump Tour with anime champions, The Pillows. 2006, Noodles became the grand prix of the Rock section in Japan of DIESEL U-MUSIC. 2007, Noodles was done the tour in SF, LA, and NY and made it big again. 2008,They performed to MIDEM that is one of the world’s largest music trade fairs as a representative from Japan. Even with the 2004 loss of their second guitarist, Junko, the girls show no sign of slowing down. In fact, their songwriting has never been better and their fan base, both in Japan and in the States, just keeps on growing. Noodles remain Japan’s best all-girl rock ensemble.
DELICIOUS LABEL RELEASE 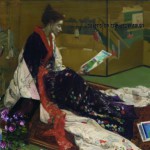 noodles / Loafers on the Japantown 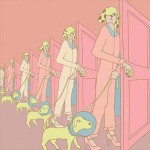 noodles / MAKE UP TO BREAK UP 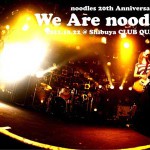